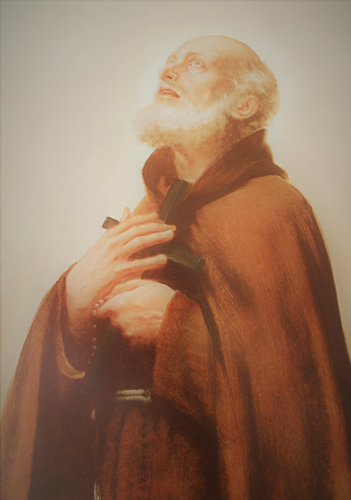 Ignatius Belvisotti was born in 1686 in Santhiá Vercelli, to the north of Italy and was baptized with the name of Lorenzo Mauricio. Having been ordained as a diocesan presbyter, he gave up the parish and the canonry to join, in 1716, the Minor Capuchin Brothers. Obedient to his superiors, he served different positions with a holiness of life and deep doctrine, among them, that of teacher of novices and military chaplain. Lived for many years in the Mount of the Capuchins convent in Turin dedicated to spiritual guidance and assistance to the ill. it was there that he died on September 22, 1770. Well- known for heroically practiced virtues and wonders performed, Paul VI made him blessed on April 17, 1966, and John Paul II canonized him the May 19, 2002.