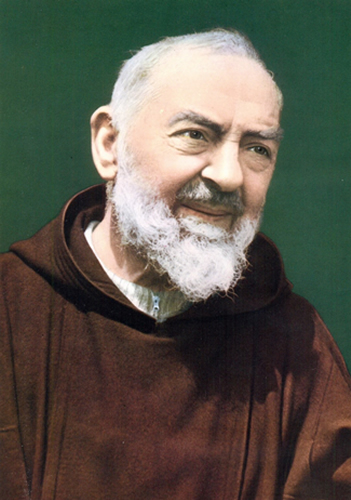 Pio, whose name was Francisco Forgione, was born in Pietrelcina in the Benevento province on May 25, 1887. He joined the Order of Minor Capuchin Brother on January 6, 1903 and was ordained priest on August 10, 1910 at the Benevento cathedral. He arrived to San Giovanni Rotondeo on the outskirts of Mt. Gargano on July 28, 1916, where, with few and brief interruptions, he remained until his death on September 23, 1968. In the morning of September 20, 1918, while praying in front of a crucifix in the choir of the old conventual church, he received the gift of sores which remained open and bleeding for half a century. During his life he performed his priestly ministry, founded “Prayer Groups” and a modern hospital which he named “Relief from Suffering House”. He was made blessed on May 2, 1999 and canonized on June 17, 2002 by the pope John Paul II.