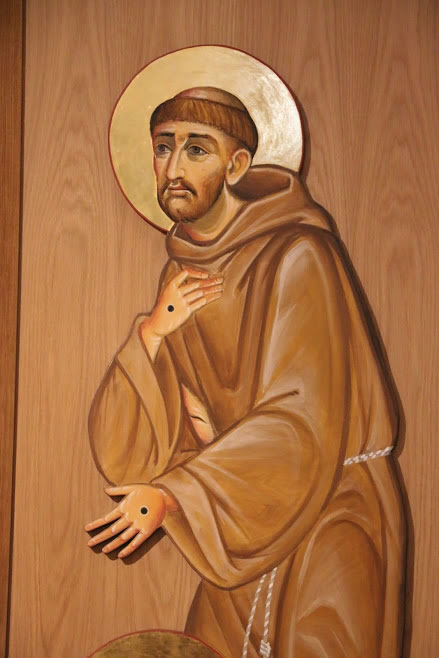 Francis, founder of out Order, was born in 1181/82 in the city of Assisi, Italy where he lived most of his life. Son of a rich merchant, he distinguished himself during his youth for his leadership, joy and festive spirit. During the war between Assisi and Perusa in 1202 he was made prisoner and spent a year in jail, where he began his conversion process. His ambition was to fight the Crusades and but be named knight, yet loneliness, illness and certain interior voices, drove him to a radical change in his life, to the point where people said: “He has gone mad”-

In his conversion process, Francis sells his horse, gives away his armor and returns to Assisi. Discovers the beauty of nature and searches for the meaning of life. He crosses all social barriers when he kisses a leper, the outcasts or despised of that time. Through the crucifix of St. Damian, Christ calls him to repair his church. Francis listens to Jesus and his word in the Gospel, that due to different situations of the time breaks his familial ties and lives in strict poverty. He scandalizes many and attracts others that ask him to share his life.

The number of brother who proclaim the kindness of God the Savior, peace and reconciliation multiplies in Italy and other places in a short time. Men, women and whole families ask to follow Francis.

He writes a brief rule, approved by the Pope Honorius III, starting the Franciscan Order.

In 1224, among his multiple health issues, the Lord blessed our brother Francisco with the Wounds of Christ and he composes his known Canticle of the Sun. He dies in 1226 among his brothers, naked on the ground, in front of his hut. He lies buried in the Basilica of St. Francis of Assisi.