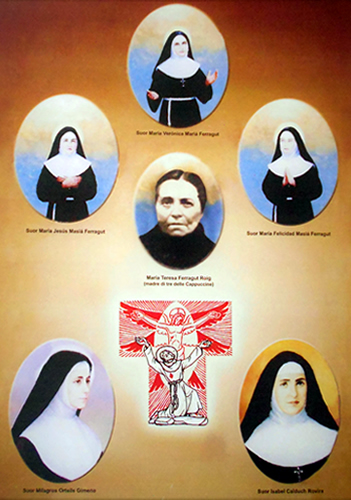 Five Clare Capuchin sisters were martyred in the religious persecution in Spain in 1936, foremost, blessed Mary Jesus Masiá Ferragut. Sisters Mary Jesus, Mary Veronica and Mary Joy Masiá Ferragut, the three of them, blood sisters, martyred along their mother Mary Therese, were from the Agullent monastery; Elizabeth Calduch Rovira, from the Castellón monastery; and Milagro Ortelis Gimeno from the monastery in Valencia. They were all in their plenitude of life and identified with their Franciscan vocation, gave their lives as testimony of faith, uniting the crown of martyrdom to that of virginity. Exceptionally heroic was the death of the three sisters, of another blood sisters, Josefa, a barefoot Augustine, and their mother, an old woman of 84, the last one to be executed, who stood firm while watching her four daughters die. It was October 25, 1936, the feast day of Christ the King. On November 20, in similar circumstances, Sister Milagro Ortelis was martyred, and on April 13, 1937, Sister Elizabeth Calduch. They were named blesseds by John Paul II on March 11, 2001 alongside a group of martyrs from the Community of Valencia, 233 in total, out of which 50 were brothers and sisters of the Franciscan family.