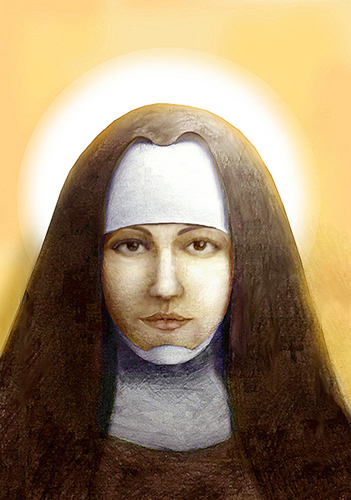 One of the countless martyrs that gave their life for love during the religious persecution of the Second World War. Born in the year 1902. While still young, her father, fascinated with the atheist socialism, emigrated from Warsaw to the Soviet Union. She joined the Clare Capuchins in 1923, “with the consciousness of repairing her family’s guilt, infected of atheism”, and took the name of Sister Mary Therese of Baby Jesus. On April 2, 1941, the Germans barged into the convent and arrested 36 nuns, who were taken to the Dzialdawo concentration camp. “I will not leave here, I offer my life so that the sisters may return to the convent.” She died on July 25, 1941. Two weeks later, the 7 of August, the sisters were released. She was named blessed by John Paul II on June 13, 1999 in Warsaw along with other five Capuchins in the group of 108 Nazi martyrs.